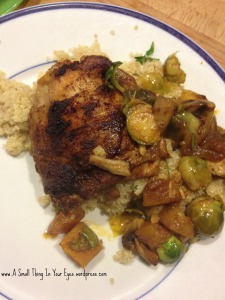 It may not be the prettiest food you have ever seen, but it sure is tasty!

If you have taken a whiff of berbere, you know there’s a kick to it.

I will admit it, my kids thought it was too spicy, but Optimist and I loved it!

I tweaked the recipe found here.

Here’s one secret, I don’t like Brussels Sprouts, but in this dish, I love them (because I can’t taste their original flavor!) 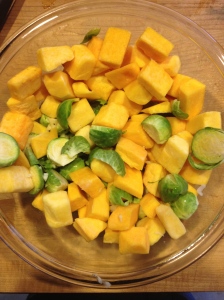 It starts out pretty.

Chopped butternut squash (I cheated and bought it cubed at Costco)

While you are at the chopping board,

slice lemons and limes, chop some parsley and throw a couple pats of butter down.

Cooking the chicken and veggies

Sear the seasoned chicken thighs and then throw in some sliced onions and mushrooms.

Cooking the chicken and veggies

After a few minutes, add the brussels and squash.

(You can tell how hot it is by the steam in the picture.)

Add in some water, put a lid on it and let it simmer for quite awhile.

Meanwhile, cook up some quinoa.

Once it’s done, squeeze in the lime (a bit of lemon if desired), 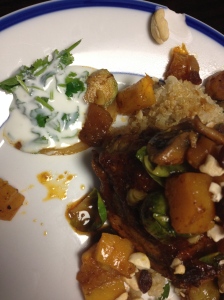 You will learn quickly that I love toppings.

So for a side to help cool down the heat, I put some cilantro into plain yogurt.

I also chopped raw cashews and added raisins for a little sweetened twist.

Throw a couple limes on the side if that’s your thing and bam!

Cooking Liquid (I used water, but broth would work as well)

I used a deep electric skillet but a regular stovetop large pan should work as well.

Season chicken with salt and Berbere (the more you put on, the spicier it is).

Drizzle a little olive oil to pan and let it heat. Once hot, place chicken thighs skin down on the pan. Let sear.

5-7 minutes later, flip chicken over and add sliced onions and mushrooms. Cook for a few minutes, stirring once or twice.

Add in liquid, squash and brussels sprouts. Put lid on and let it simmer for 15 minutes or so.

Meanwhile, cook quinoa according to package. After it’s done, fluff and add butter, chopped parsley and a few squeezes of citrus (lime or lemon or both!)

Remove the lid for the chicken and vegetables and let the water evaporate a few minutes while the food continues to simmer.

I'm here to encourage you as your life may be different from the American norm, whether that's adopting or living overseas, I'd love to get to know you!

Feel free to email me:
asmallthinginyoureyes@gmail.com